Skip to content
Rotterdamn’it went to Den Bosch to play the 3rd Outdoor Competition expecting a cold, gray and rainy day. The numbers did not look good to maintain our right to the 3rd Division. The previous evening the team was down to 7 players. At least 4 of these were going to start the day with injuries of some kind (not counting the bruises from the paintball session of the day before).
It was then when Guang (usual pickup) came in and offered to play despite the weather forecast and other plans. That made our team Savage +1. And that sub will prove very relevant in two ways: because some players would need a rest at some point and because Guang played amazing.
We went to the fields feeling like fighters of ‘El Alamo’ or ‘300’ ready to defend our ground in 3rd Division to the last breath. But unlike them we had no intention to ‘dine in hell’.
BeeFrisbee2’s
The first opponent was BeeFrisbee2’s. Coming from 4th Division and only other team having ladies in the roaster made them theoretically the most approachable opponent and the team to beat. We started the match with a quick lead of 5-0. From then on we traded points most of the game. Just in the end we were able to increase our gap to reach 15-6. With an initial victory and our clothes still dry we took shelter.
Ultimaas
The second match up was against Ultimaas. Coming from 2nd Division and looking strong and athletic they seemed too much power for us. But we jumped onto the field ready for the challenge. We managed to keep up against their zone and man defense to reach 7-8 behind and offense. During the recess our strength was starting to fade and the time still to be played seemed abysmal. It was in the second half that their dump pressure and fresher legs started to give them advantage. Our pep talks and very well engineered hydration mechanisms were not enough. Once we were 3 points behind our bodies gave up and we could not keep up with their cuts. They beat us 9-15, masquerading the great effort of the first half.
Blue Spider Dogs
The final opponent was Blue Spider Dogs (a combination of WAF, Blue Fingers and Vertigo) who again looked very masculine, experienced and athletic. We started a trench warfare in which we managed to get our points in offense and control their dangerous long game (our spies reported that hugs gave them their victory against Ultimaas). Our defense became a switching machine that constantly assimilated the gender mismatch getting an incredible amount of turns. We got to half time leading 8-7 and starting in offense. The fear of lowering the level on the second half as last game could be felt. But we kept on going to reach a short advantage of 13-12 under heavy rain. By then our clothes were heavy as lead and our legs ready to surrender. Some of our players were deciding who would stay in the field base on “the less injured” rule. In a point with many turns we had some misthrows and unnecessary drops that took us to 13-13, universe. In a decisive play in front of their endzone, Joep was running free into the break side, Oscar tried to throw an around break that was layout blocked in an impressive move by its mark. A quick counter attack gave BSD the victory. Beaten but very proud we huddled and shared “games like this is why we play ultimate” kind of comments under the rain. 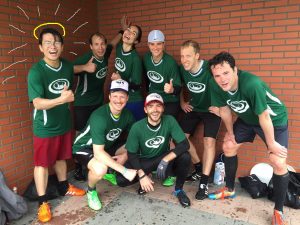